In times like these, we talk about businesses with systemic relevance and those that have none. For me personally, these are, in the current days, above all the people who ensure that, despite hamster purchases, the supply is maintained and, above all, that the health care of the population is guaranteed.

But I also consider football as a symbol of our society to be systemically relevant.

Because normally I stand in the stadium with a pulse of 180 and, together with my mates, scream my head off to get our club winning. The first ghost game of the Bundesliga was an affront for the fans. Without emotions and without the spirit of football.

In times when everyone was only looking to increase efficiency, when maximizing the profits of companies and banks was the top priority, there was little room for the human element. So football has pushed itself into this gap, making room for humanity and emotion. Here you can cheer, shout and simply be human. The exchange about the most banal thing, football, has become a foundation in social exchange. Here people can get away from their own pressure to perform and optimize and just be a fan. Scolding, celebrating and letting their emotions run free in all tastes. In addition, it offers a sense of cohesion in the most diverse situations in life. You have a common ground in every conversation, by exchanging ideas about various football topics and clubs with others.

Football and the Corana crisis

But what do we do now in the current crisis caused by the corona virus Covid-19? Where the Bundesliga matches are postponed and where the first ghost games have recently been played due to a pandemic?

Even though the Bundesliga games will hopefully be held again soon, it will not be the same as before: there will still have to be ghost games. Or only a few people will be allowed to enter the stadium. Because even the virologist Prof. Christian Drosten, who became known through the current corona crisis, predicts that there will be no full football stadiums until next year. Because things that are supposedly not systemically relevant will have to be done without until the corona pandemic is overcome.

But is that really the case?

Football can be a glue for our society. People are looking for a sense of belonging at this special time. That’s why we should try to get things going again as soon as possible, so that we don’t isolate and distance ourselves too much from everything and everyone in our home quarantine.

And this is where digitalisation comes in. The crisis has given us time for new possibilities. Because every crisis also contains an opportunity.

Germany as a digital trendsetter

Who would have thought that four weeks ago?

The Hackathon #WirVersusVirus, a digital competition called by the German government, in which programmers, designers, creative people and mentors have come together under the patronage of the federal government with the aim of developing solutions for the current challenges posed by the Corona crisis.

Nearly 43,000 people participated nationwide and from abroad, including 2,000 godparents and 2,900 mentors who supported the developers as experts. In addition, there were several thousand offers of support from the business community. Almost 3,000 challenges were submitted by various professional groups, including the optimal management of hospital resources such as ventilators and intensive care beds or the tracking of the chain of infection.

This was the biggest hackathon ever (Fun fact: the Guinness Book of Records is currently examining a possible record). By the way, other countries are following and will be holding their own hackathons in the coming weeks.

This makes Germany a digital pioneer.

Football for your soul

Commitment, solidarity, togetherness is one of the most important factors of our society! Above all, bringing people together in this time of isolation is an important point that can also have a positive effect on mental health. What would a society be without cohesion? Especially this current crisis situation shows this importance. Through various cultural events, such as football, we can feel this closeness and emotions towards each other.

And how can emotions best be transported in the stadium? Through applause, through our own voice, through collective singing.

A great heart project, which was brought to life by the initiative of the Federal Government and the Hackathon, is "meinapplaus.de", which is dedicated exactly to this topic: 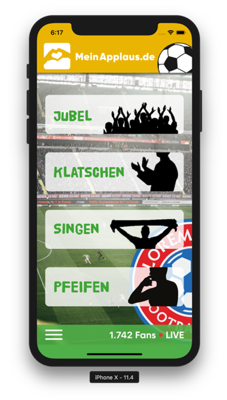 “Love and football – both of them are heartbreaking.

This is to remain so in times of Corona – with the necessary protective and precautionary measures, but just as a good mood. With the fan app MeinApplaus.de, we bring the good mood back to the stadium for fans and clubs, even when the stands are empty, and motivate the respective teams to perform at their best with cheers. After all, you can’t do without fans,” explains Viktor Mraz, inventor of MeinApplaus.de and managing director of Herzenswerk.IT GmbH in Munich.

More great ideas that came out of the Hackathon:

* If you want to see the embedded videos and click on them, personal data (IP address) will be sent to the operator of Youtube. This allows Youtube to store the transmitted data and analyze further behavior on the video platform.